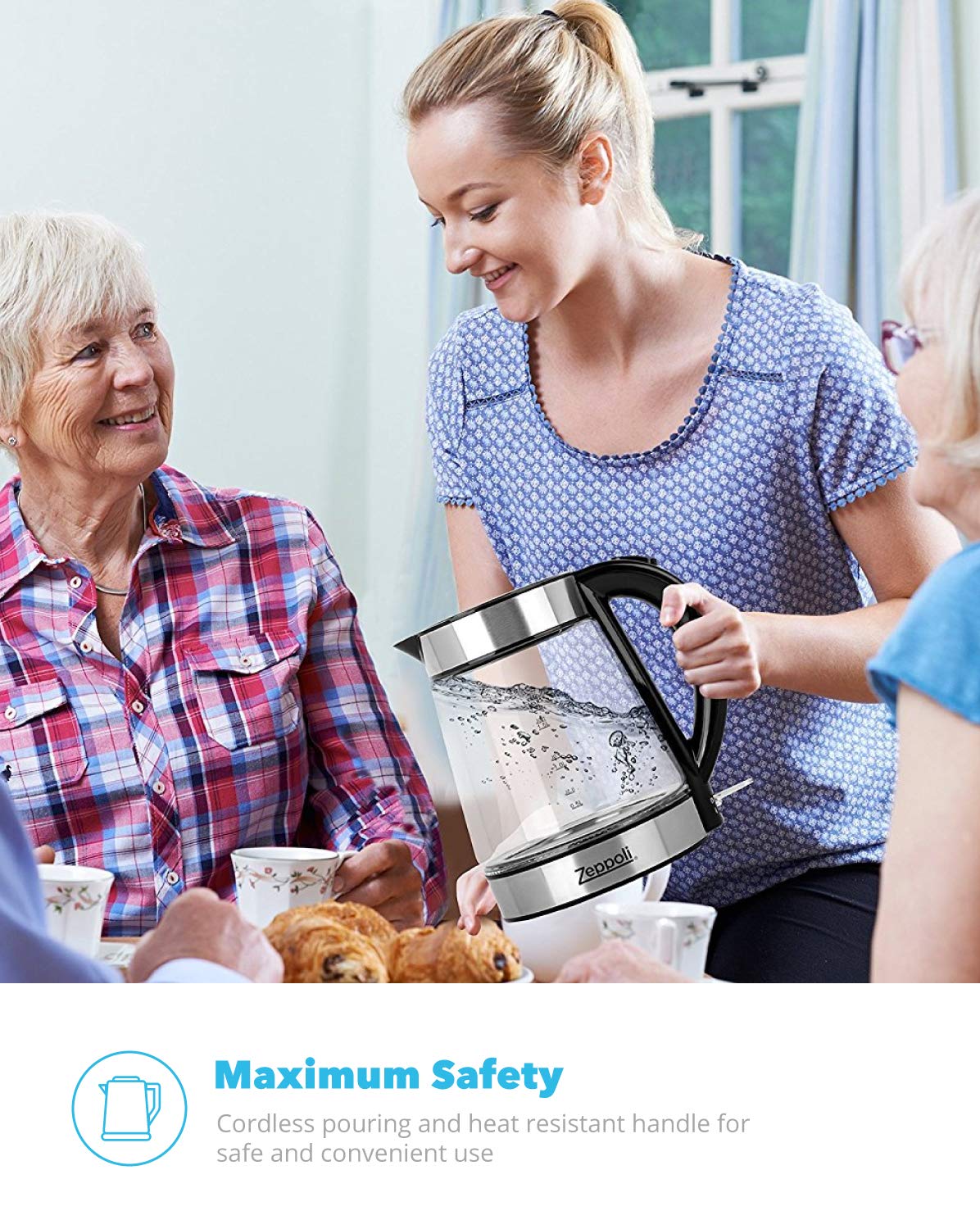 How do you usually boil water at home? Do you heat it on a stove or in a microwave? Heating water on a stove is more dangerous than you would ever imagine. According to research, there is a kitchen fire in the U.S. in every 3.5 minutes. People get distracted easily when waiting for the water to be heated up. For instance, some people use the waiting time to answer a 10-minute phone call, go out and check their mailbox, or even fall asleep on their couch. On the other hand, people also get injured using the microwave to boil water. The safest, easiest, and swiftest way to heat water is to use an electric kettle.

By using the Zeppoli Electric Kettle to boil water, you will no longer have to bear the slowness of the stovetop or the noiseness of the microwave oven. The Strix thermostat control and automatic shut-off technology not only save you the headache of monitoring but also save you from danger. The kettle is designed with an anti-slip grip and heat-resistant handle. The kettle will never slide out of your hands. And you will never get burned because the handle will never get hot. Even though you press on the small plastic button accidentally and don’t even notice it, it will not boil if there is no water inside because the kettle features boil-dry safety.

The Zeppoli Electric Kettle is perfect for any anything from tea, coffee, or hot chocolate to instant soup or noodles. At maximum capacity, it boils 1.7L within 5-6 minutes. You will be able to know whether the kettle is working or not with the blue LED indicator light. This kettle is easy to clean as well. It is installed with a steel mesh removable filter that helps you strain out ingredients. The filter can be removed and cleaned. With the wide opening lid, you can reach the base with your hand or use tools to clean the kettle. When shopping for an electric kettle, the most important thing is to remember to purchase a 100% BPA Free kettle. The Zeppoli Electric Kettle qualifies this requirement because it boils water with no harmful contaminants.

Compared to stove kettles, an electric kettle has the following advantages: time-saving, portability, temperature control, energy efficient, and auto shutoff. Glass design and removable filter are hallmarks of the Zeppoli Electric Kettle. You will not have to waste time on monitoring the kettle while it’s boiling water. It helps secure the safety of your kitchen. Having an easy-to-clean kettle can ensure great-tasting and healthier results.

How To Prevent Scratches On Hardwood Floors

The Perfect Coffee Machine For Being Stuck At Home 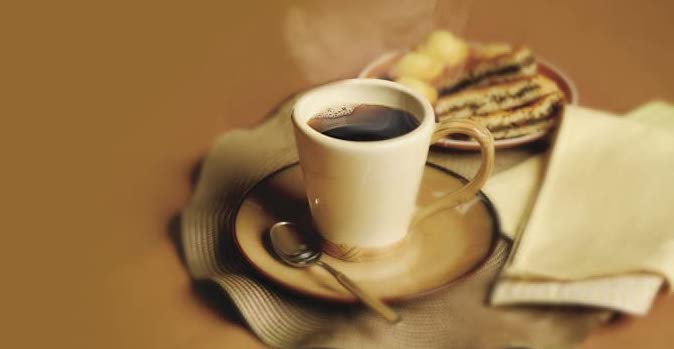 Late last week, something tragic happened: Our coffeepot broke. Someone who shall remain nameless had the temerity (or, more accurately, maladroitness) to drop the pot, shattering it into a million tiny little pieces. I arose up that morning to the devastating news that, for the first time in as long as I can remember, there would be no coffee greeting my awakening.

This problem was not easily remedied. In the days immediately following the fiasco, one of the members of my household had to make a Starbucks run each morning. This solution may have stuck a Band-Aid on the issue, but it was clearly not economical in the long run. No, we needed a new coffeepot. But which one?

I’m not exactly sure who came up with the idea to eschew the traditional 12-cup Mr. Coffee machine you can buy at the Giant for $25. Still, someone did, and as a result, a 45-cup Hamilton Beach “coffee urn” arrived at our doorstep via Amazon Prime two days later. The thing was HUGE:

We’ve only been using the “coffee urn” for a few days now, but its advantages and disadvantages are quickly becoming clear. For one, the “formula” on how to make the coffee (i.e., the grounds to water ratio) is completely different from the typical drip coffee machine we were used to. Our first attempt at morning coffee was borderline undrinkable it was so weak. But we get a little bit closer to brewing the perfect cup on each attempt, and I’m optimistic that we can get there soon.

The coffee urn’s biggest selling point is that it stays hot all day, as long as you keep it plugged in. The quality of the coffee will not diminish as the day goes on, as in the case with joe made in your traditional coffeepot. This has proved quite the boon during quarantine, when you want just one cup for an after-lunch pick-me-up, but do not want to go through the hassle of brewing a whole new pot. The jury may still be out on if this is actually a better buy than what it replaced. But for just $49.99 there is no question it offers great value. 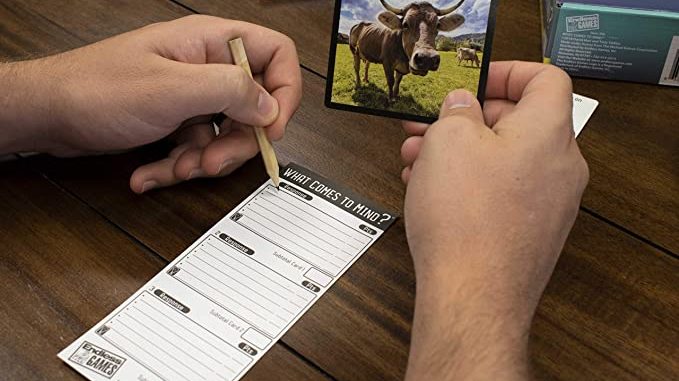 Earlier this quarantine, I promised to feature suggestions of games to play with the family while stuck in isolation. Last time, I reviewed Trivillennial. Though I promise that will not prove to be the last trivia game in the series, this week I’ll profile a game of a different type. It is called What Comes To Mind?

The well-known game “What Comes To Mind?” most closely resembles is Scattergories. Like Scattergories, the object of the game is to come up with a word or phrase when given a prompt. Unlike Scattergories, instead of aiming to conjure a unique answer, you are rewarded based off how many other players you match. Instead of testing your creativity, “What Comes To Mind?” examines how well you know your competitors. That twist makes things a bit more interesting. Furthermore, eliminates the tension that inevitably arises in Scattergories, when someone lobbies for the acceptability of their undoubtedly unique but hare-brained response.

The one problem I have with What Comes To Mind? is with the format of each question card. Each double-sided card features an image on the front and six questions or statements to be answered on the back. The sixth prompt is always “What comes to mind when you look at the image on the other side of this card?” It is a clever idea, but it fails in implementation. Almost always, everyone just names the contents of the picture: “Ferris wheel,” “butterfly,” “squirrel.” The only possibility for amusement is when a player completely misidentifies a commonplace thing and ends up, for example, writing down “parrot” when the photograph depicts a parakeet.

What Comes To Mind? comes with 75 cards, allowing for many nights of family fun. When our long national nightmare is over and done, it will presumably make for an entertaining party game as well.

It’s Time To Get An Instant Pot 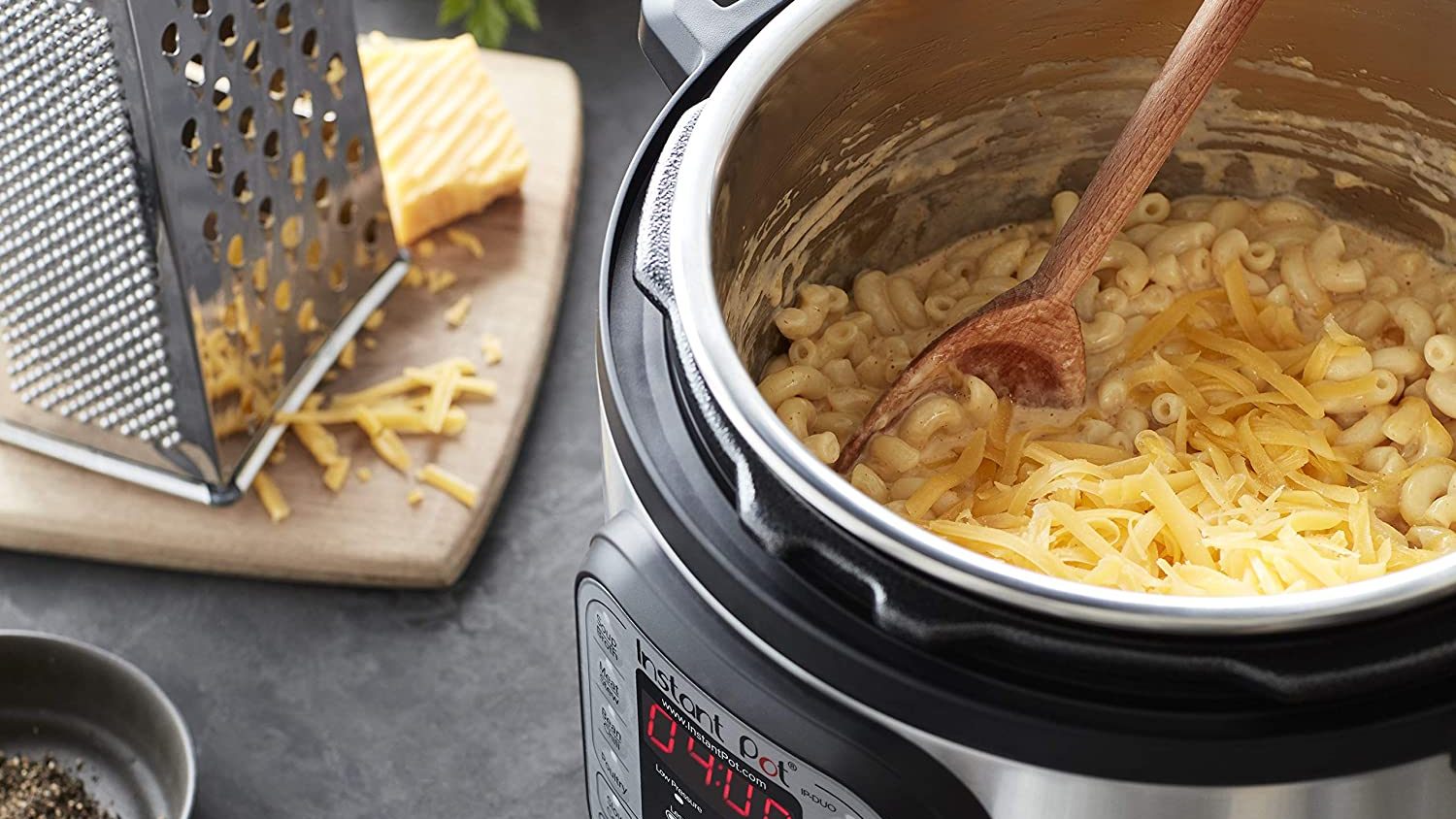 At this point, everybody knows about the Instant Pot. After four or five years of it being the most popular product on Amazon Prime Day, plus the proliferation of dedicated social media fan groups and fawning media profiles, the Instant Pot has exceeded its cult status. We Know Products even featured an article about the Instant Pot a year ago. If you don’t own an Instant Pot by now, it is because you made a conscious decision.

However, it may be time to rethink that decision. With still no end in sight to mandated social distancing, we have to come up with ways to make life less mundane. That means trying out new things, especially when it comes to recipes. There’s no doubt you’ve tired by now of making your pre-quarantine staples. The Instant Pot affords you the opportunity to experiment.

The Instant Pot, famously, is seven kitchen appliances in one. It comes with the functions of a pressure cooker, slow cooker, rice cooker, steamer, sauté pan, yogurt maker and warmer. To some people, this might seem daunting. With so many options, how is one to know where to start? Now that we are in quarantine, it doesn’t matter as much. You have all the time in the world. If you fail, who cares? Just try another recipe the next day. There certainly is no shortage of Instant Pot recipes available.

The other day, we attempted our first foray into the wide world of Instant Pot by making beef and broccoli. It turned out great! I am already looking forward to the next quarantine creation.

Could The Oculus Quest 2 Usher In The Age Of VR?