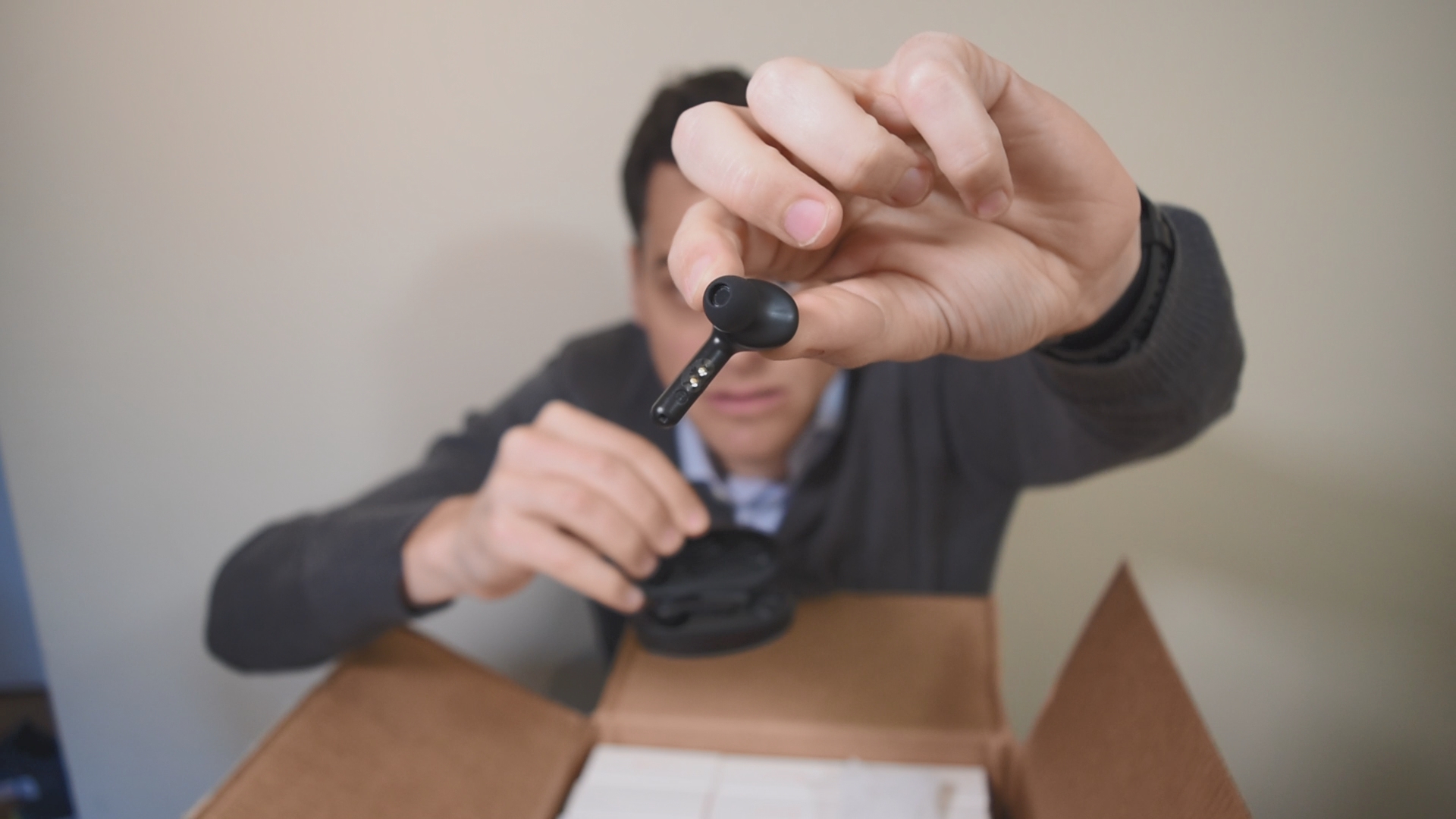 Like most tech reviewers, we have a love-hate relationship with Apple. Love their products. Hate their prices.

Luckily, bluetooth technology has advanced to the level such that competitors can sell True Wireless earbuds that are as good or in some ways BETTER than AirPods.

The We Know Products staff recently got to try out the new TaoTronics TT-BH053 bluetooth headphones (WATCH the video below to find out how you can, too). These headphones solve the “not having AirPods” problem without making you buy AirPods. First thing’s first, unlike AirPods, they actually fit in your ear: The BH053 come with three different sized silicone earbud tips, so you are sure to find the right one for you. As you can see in the video review, we tested them out, and the BH053 earbuds did not fall out while running. How many AirPod owners can say the same thing?

The TaoTronics BH053 offer an industry-leading 40 hours of playtime with use of the very small and very portable charging case that fits in your pocket for easy storage. Watch the video for an in-depth unboxing and review and for a chance to win the We Know Products giveaway. (Can’t wait? Buy the TaoTronics BH053 on Amazon now for just $45.)

WATCH The Full Review And WIN A Pair Of TaoTronics BH053:

These Four Accessories Will Protect Your Phone

I Finally Got An Apple Watch, And I Love It (With One Caveat) 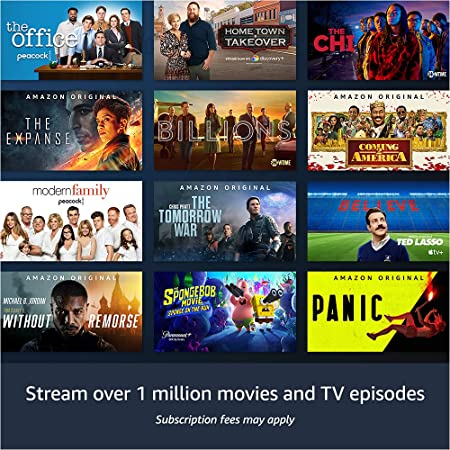 If you’ve visited Amazon.com today, you have surely seen the big news: all Amazon customers are now invited to “Rethink TV.”

At first glance, this seems like a slogan fit for about a decade ago—before Netflix, before Hulu, yes even before Amazon Prime and its popular programming. Amazon Studios took home its first Emmy Award in January 2015. Wasn’t that a result of a new way of thinking about TV?

But this announcement is all about hardware. Since streaming services have already cannibalized their network programming ancestors, the industry is now ready to change how people access their new content options. Or, at least, that is Amazon’s plan. They are now selling two lines of “Fire TVs” designed to eliminate any friction that comes from watching streaming services on television sets originally designed for the old ways.

This might come as a surprise to some Amazon customers, who mistakenly believe they already own a Fire TV. It is true that Amazon has been marketing Fire TVs for years, made in conjunction with brands such as Toshiba and Insignia.

Turns out, those aren’t really Fire TVs. They are just pretending to be. A real Fire TV is actually made by Amazon, and it carries all the advantages that implies.

The two new Fire TV lines are named Omni and 4-Series. The Omni is the higher-end one, and it contains functions that Amazon has mastered on some of its Alexa devices but only work to varying degrees on other Amazon-branded products. The big one is voice control. Anyone who has ever owned an Amazon Fire Stick can attest to the spotty record of clicking the little mic button and getting the TV to respond correctly. It just didn’t happen very often. Well, the Omni is here to change that. Not only do you not have to press a button; your television does not even have to be on. That’s right, it works just like the Echo sitting on your kitchen counter—it is always listening, whether you like it or not.

The 4 Series lacks the voice recognition capabilities of the Omni, but it does boast impressive 4K Ultra HD visuals. And it still allows for the use of Amazon’s key market advantage. Since Amazon knows all your shopping habits, and since it has been listening patiently in your home, Amazon has a tremendous amount of information on your likely viewing habits. Therefore, it can serve you exactly the type of content you are sure to enjoy. (Perhaps relatedly, Amazon Fire TV’s are the first to support TikTok, a popular app that has come under fire for this very same algorithmic learning). 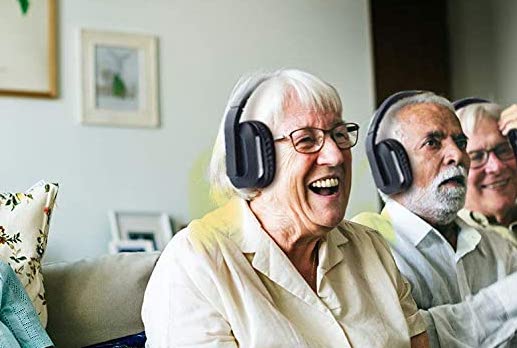 So much of what we recommend at We Know Products comes from things that we have found useful in our daily lives. Today, I want to share a product that has changed not my life, but that of my grandfather. It is this Avantree wireless headphones set. The way he talks about it, this product is a veritable miracle worker.

My grandfather suffers from major hearing loss, and he has worn hearing aids for as long as I can remember. Whenever we visited our grandparents’ house as kids, the TV’s closed captioning would always be turned on. It was something my siblings and I became accustomed to, although we were never sure if it was done purely for our benefit: When we weren’t there, could my grandfather hear the television at max volume? This question was answered when he started to live alone, and we would drop by unannounced. Instead of having the sound cranked up, he watched it with the volume completely off. He relied entirely on the closed captions. He could not hear the television at all.

I was surprised, then, when I visited him recently and found the TV on with no captions. When I asked what that was all about, he motioned to the Avantree headphone set, which he had on its charging dock. “Check this out!” he said, handing them to me. I put on the headphones, and although I had to turn down the volume immediately, I heard what was going on onscreen. Then I saw my grandfather say something to me, but I did not hear him.

I took off the headphones. He explained that this headphone set allowed him to hear the TV for the first time in two decades. Not only does it amplify the sound to the necessary decibels, but it blocks out all the surrounding noise and isolates only the desired noise. That cleared the biggest hurdle.

I was very impressed. The only downside I could see was that if he had the headphones on, no sound would come out of the TV, so we would not be able to watch it together. However, after doing some more research on the product, these fears were allayed. According to Avantree, you can pair up to 100 different headphone sets, and then each person can listen at whatever volume suits his or her needs.

The Avantree wireless headphone set only costs $100, which is wild considering it practically cures deafness. It is easy to set up (which is important, considering technophobic seniors are its target audience). The headphones pair automatically once you plug the charging dock/transmitter into the TV. 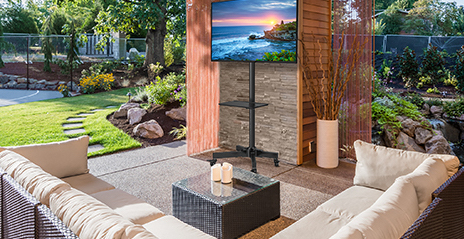 Fourth of July 2021 was a weekend I will never forget. Not only did I get to see friends I hadn’t seen since before the pandemic, but I also was introduced to an entirely new philosophy of life. It’s called “roving.”

Rove life is not the same as #vanlife. Roving does not involve dropping everything and hitting the great outdoors. The only commitment you need to join the rovers is a TV stand on wheels, colloquially called a “rover.” Here is the one owned by my buddy, the apostle of rove life who called me to its teachings:

What is roving? Roving is the revolutionary notion that your television viewing habits do not have to be constrained by the spatial demands of the universe. In pre-rover households, you have to decide on one spot to place your TV, and that is simply where that device is kept until you get sick of it and decide to rearrange the furniture. These days, most people affix their televisions to their walls, so there really is no moving it on a whim. As a result, the TV becomes a semi-permanent fixture.

Roving liberates you from all that. By having a roving TV stand, you can situate your TV wherever you want it, for whenever you want it. The best use case in my experience is being able to rove your entertainment outside for nice evenings, or (as was the case with Independence Day) when you have people over for a grill out. Another good roving scenario is when there is contention in the house over what to watch. Assuming you still have a primary television set up in the family room, you can rove in your second set so that both people can enjoy their shows while still spending time with one another.

For those who might still be skeptical, let me remind you that roving has been around since the very beginning of television. Watch any episode of The Dick Van Dyke Show if you don’t believe me. You will see the Petries rove their TV from their living room to the bedroom before they go to bed each night. And Rob Petrie worked in the television industry! When the small screen first hit the market, it was quite expensive for regular folks. A rover allowed you to watch your shows in more than one room without having to buy more than one TV.

One final note about rovers. If you search for rolling TV stands on Amazon, you will find a plethora of options, including the one featured at the beginning of this article. However, it is not always clear that you can live the rove life by setting a TV down on the cart when you are ready to roam. Many make it seem like you have to mount your TV to the rover as if on a wall. That is certainly an option, but if that seems like a lot of hassle to you, you can use the rover in a more traditional manner—there is a simple stand you can put your TV on when you want to. Then, if you need your TV in a room that is not easy to roam to (such as on a different floor), just pick up the TV and move it. No screwing or unscrewing required.

Start The Spooky Season Off Right With These Halloween Decorations