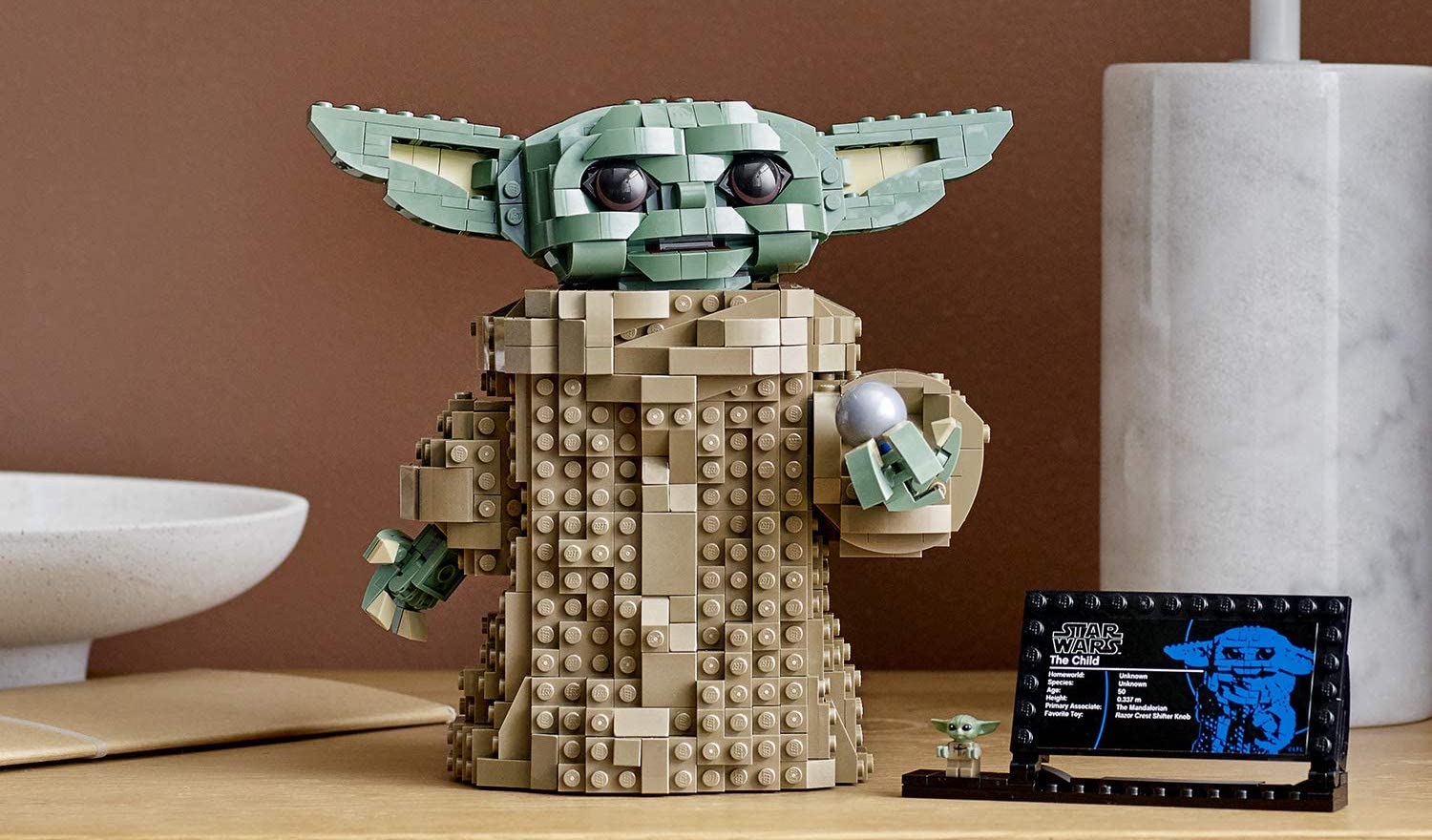 In less than a month, the second season of the hit show “The Mandalorian” is slated to premiere on Disney+. Unless you’ve been living under a rock over the last year, you know that this signals the vaunted return of the character affectionately known as Baby Yoda.

Baby Yoda has quickly become the most popular character from the Star Wars universe. Last year, Baby Yoda plush dolls sold out months in advance. With “The Mandalorian” set to come back on October 30, now is the time to get your very own Baby Yoda while you still can. Supply chains have been so disrupted this year, this might be your best chance to capitalize before Christmas.

If you were lucky enough to get your hands on a Baby Yoda plush doll last year, then up your game with Disney’s latest offering: a 1,000+ piece Baby Yoda LEGO set.

HBO Max Would Be Nice If You Could Actually Watch It

HBO Max Would Be Nice If You Could Actually Watch It 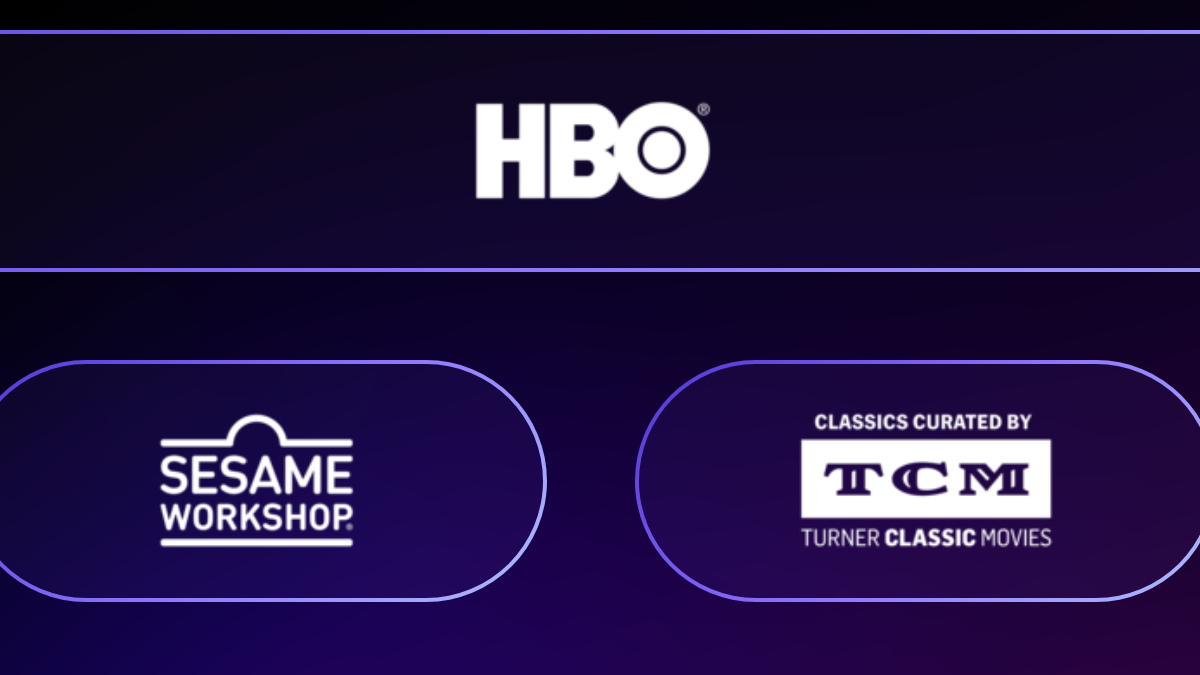 In retrospect, I should have read the fine print.

HBO’s new standalone streaming service, HBO Max, debuted last week to great fanfare. Ads for HBO Max have been ubiquitous over the last month, filling not just typical spots on TV and the internet but even taking up space in CNN’s “breaking news” ticker. The value prop was straightforward enough: All those shows that you’ve been told you absolutely have to watch (The Sopranos, The Wire, Game of Thrones, etc.) plus all 10 seasons of Friends (and eventually an all-new reunion special), plus, by virtue of partnering with Warner Bros., much better movie titles than any competing service (all eight Harry Potter movies, all three Lord of the Rings, etc.). Other offerings were catered to nicher interests (Doctor Who, Rick & Morty, and those Japanese cartoons that are supposedly achievements in high cinema), but no less impressive as part of a thick catalogue. Even at $15 a month, I was excited for HBO Max, and I’d bet a lot of other non-HBO subscribers were too. On launch day, May 27, I was geared up to enjoy some new content, especially after picking Netflix and Disney+ dry these past three months of quarantine.

Except, I couldn’t. I primarily access my streaming content through an Amazon Fire Stick. We also have a Roku and a smart TV that we at times use to watch shows and movies on Amazon Prime, Netflix, YouTube and Disney+. You’d think if there were a streaming service out there (especially one as prominent as HBO Max), at least one of those technologies would allow us to watch it. You’d think wrong. HBO Max is not supported on any of those popular platforms (Roku is the most popular streaming device in the U.S.). As Coleridge might say: content, content everywhere, and not a way to watch.

Technically, I could watch HBO Max on my TV by hooking up my computer with an HDMI cable. However, that would require an HDMI port, which the new MacBook Airs no longer support. That leaves watching it on my computer my only option. Sorry, folks, but when I watch a show or a movie, I do it explicitly to get away from my laptop.

If you are considering getting HBO Max, then I’d consider reading the proverbial fine print. Of course, there is no actual fine print, and although most reviews of the service in its first week dock points for its lack of universal availability, the media was rather derelict in telling people about this before it debuted.

Hope is not lost for HBO Max. The release of Disney+ was also plagued with technical and accessibility issues, all of which it overcame in due time. HBO Max’s catalogue is too good for it to be rendered to the dustbin of the streaming wars. But they better get this fixed soon: though it hardly seems possible, America is starved for quality content right now. It would be nice if HBO came to the rescue. 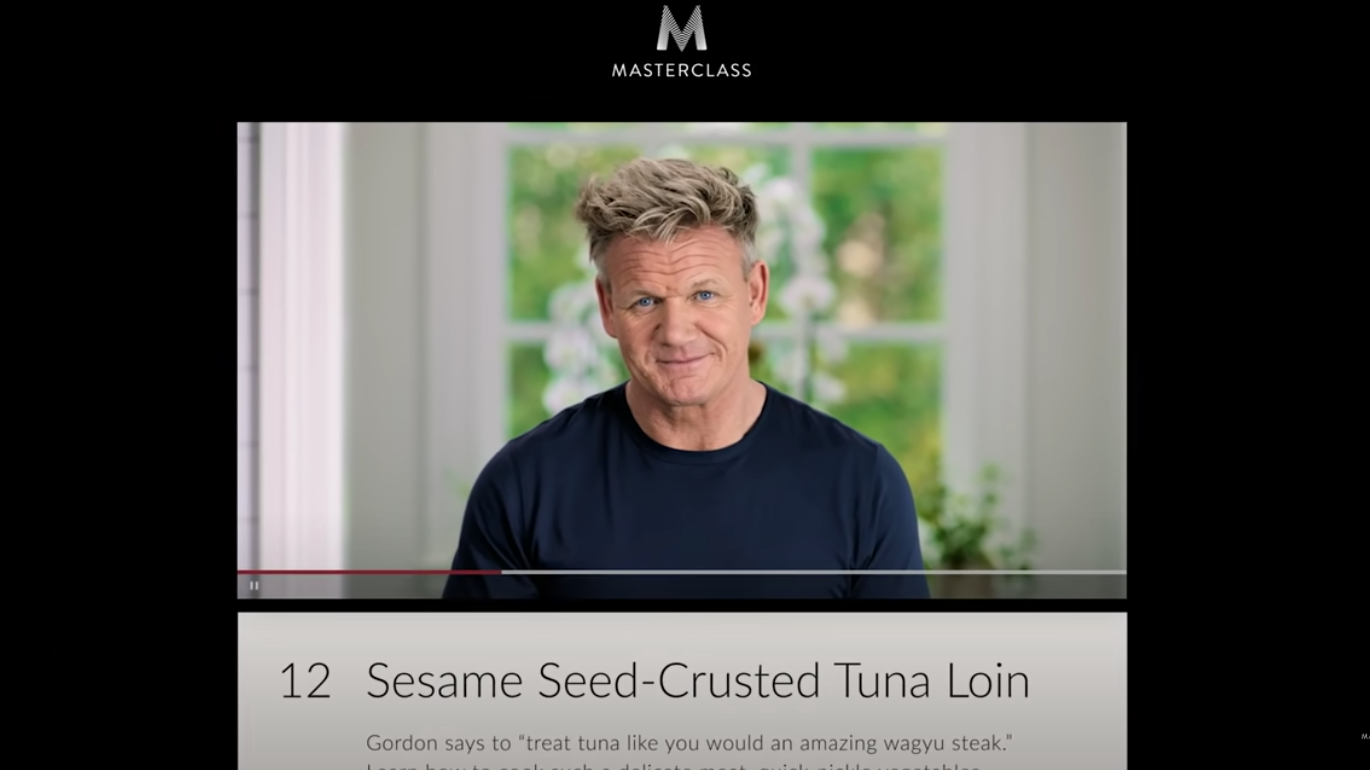 Here we all are, 2+ months since we’ve been allowed to go about our normal lives. Having finished the “Tiger King,” we find ourselves groping around for other ways to pass the days in quarantine. For the culinary-inclined, that baking sourdough and banana bread. For the professional bodybuilders among us, it apparently involves playing chess.

One potential pastime many find themselves considering is the suddenly ubiquitous online course catalogue called MasterClass. For the so-called “extremely online,” MasterClass ads are everywhere. It is impossible to search the web without stumbling onto a celeb like Natalie Portman or Steph Curry pitching you their services. MasterClass, which is propped up with over $100 million in VC funding, went all out in paying the best and the brightest to sit in front of a camera for a couple of hours to teach you something new.

But is MasterClass worth it? If you are buying just one class, which costs $90, the answer is probably not. However, the one-year all-access pass, which cost $180, is quite a good deal. You can sample subjects and teachers that interest you, even following through with a couple of sessions before realizing someone is not your cup of tea. I started to “take” a class called “Storytelling and Humor” with David Sedaris. It took me only an episode and a half to realize that he wasn’t funny.

There are so many classes on MasterClass, I couldn’t begin to evaluate them all. Undoubtedly, as with a real course catalogue, some will be better than others. I particularly liked one taught by presidential historian Doris Kearns Goodwin. In a way, it was like a CliffNotes version of her bestselling books on TR, FDR, LBJ and Lincoln. As anyone who’s seen Ken Burns’ “Baseball” knows, Goodwin is an engaging speaker.

The real question as far as the value of MasterClass is does it actually teach you anything. A Joyce Carol Oates-led seminar purported to teach me how to write short stories. Did it? MasterClass offers supplementary “assignments” and discussion groups, but without a teach to put a grade on your work, it is difficult to follow through. MasterClass’s most popular course, one that I have yet take, is taught by an FBI hostage negotiator. I am very interested to see how they advise putting that one into practice.

Pass Time This Quarantine With Trivillennial 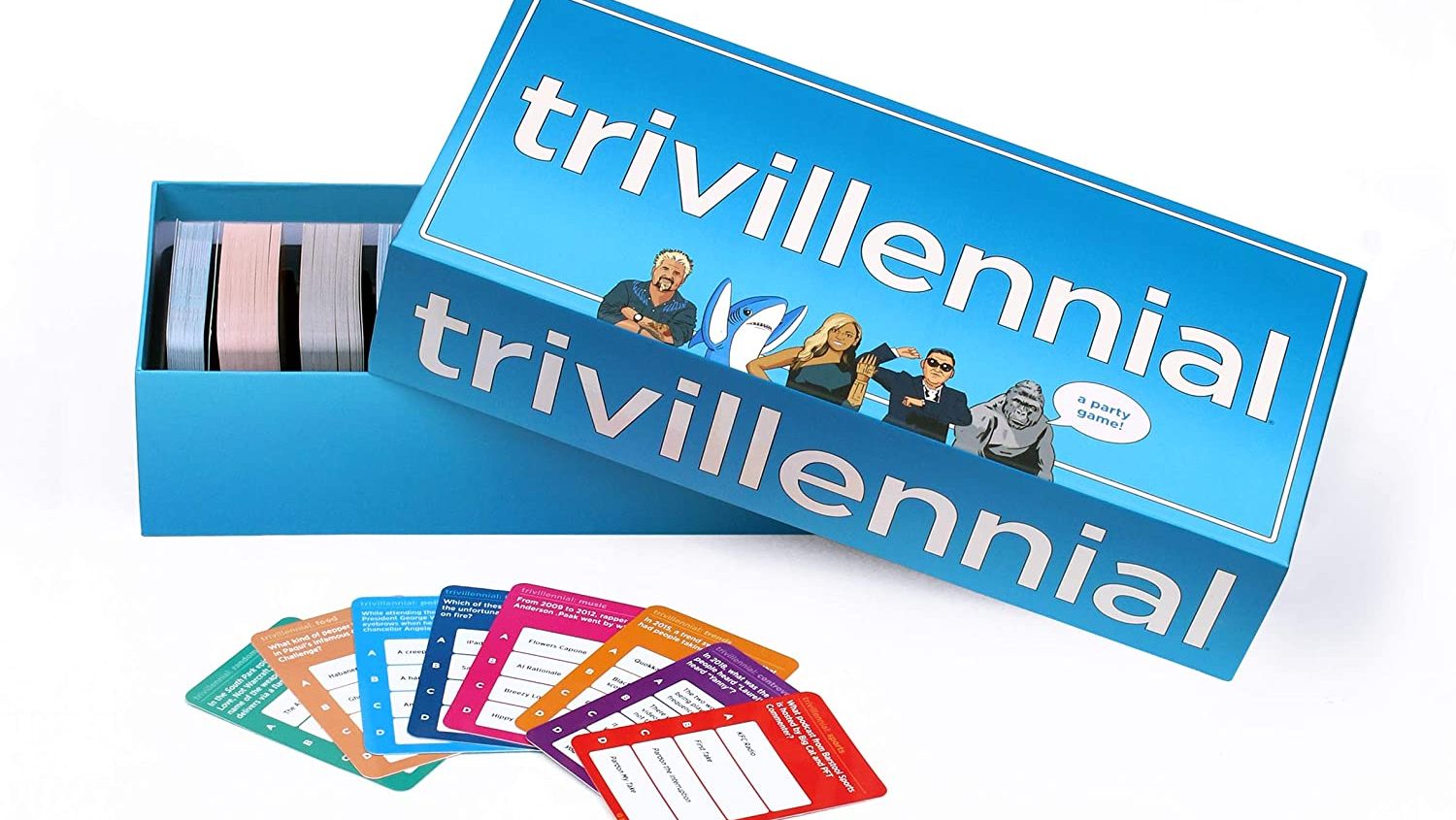 Mandatory social distancing has been going on for more than a month now, and the natives are getting restless. Protests are popping up throughout the country, seemingly less out of ideological fervor than out of the inevitable ennui that comes from being cooped up with the same people every day.

The technological advances of the 21st century ensure that you’ll never run out of things to do at home. But watching Netflix over and over again can become monotonous, even if you are discovering content you never knew existed. Furthermore, spending your days glued to a screen can’t exactly be good for you.

I recommend taking a break from TV to play a family game. I’ve come across several new games this quarantine, and I’ll detail a few of them in the coming weeks. To start, I want to recommend a game I purchased for my younger sister. It’s called Trivillennial.

As the name is meant to imply, this is marketed as “trivia for millennials.” Because of this, I was a bit nervous about getting this for my college-age sister. Since she is part of Generation Z (now aptly called Zoomers), she did not seem to be included in the target demographic. However, despite the name, we found that the questions included in Trivillennial were right up her alley. In fact, some of the questions, specifically those dealing with memes of the past two or three years, seemed squarely aimed at her generation as opposed to mine.

The other reason I was skeptical about buying Trivillennial was its abysmal Amazon rating: 3.9 stars. Generally, you only rate and review a product if you have a strong opinion on it, which is why most quality items boast scores somewhere between 4 and 5 stars. A rating below 4 indicated to me that quite a few people absolutely abhorred this game. I almost abandoned the game in search of a better birthday gift for my sister.

Typically, that is what I would have done. But being quarantined, I’m not exactly wanting for time. So I ended up actually reading the customer reviews. The main complaint — pretty much the only complaint, which formed the basis of the spate of 1-star reviews — was that many of the trivia cards listed incorrect answers. Egads! Having written trivia questions in the past, I know that there’s really only one requirement: they have to have the right answer! How could the creative team behind Trivillennial go to market without double- and triple- and quadruple-checking all the answers?

Turns out they didn’t. Lost on all the negative reviewers was the fact that the answers are listed on the opposite side of the card. All the naysayers were looking in the wrong place. As long as you follow the directions in the box, you’ll have no problem locating the answers. I wish whoever wrote the Amazon page put this in bold type in the product description so I didn’t waste all that time doing due diligence. (UPDATE: Since I bought the game, the first Amazon bullet point has been changed to: NOTE – The answers are on the reverse (back) side of each card at the bottom!)

Trivillennial is a fun trivia game. Some of the questions are pretty obscure (how was I supposed to remember a bear breaking into someone’s backyard to sip a margarita?) but the multiple choice options give everyone a chance, no matter their generational cohort. Zoomer, Millennial, Gen X, Boomer, this game is fun for the whole family. And who knows, you might just learn something about culture today.

Does COVID Mean I Should Get An Air Purifier?

Your Kid Wants Squeakee The Balloon Dog For Christmas

How Do You Charge The New iPhone 12?